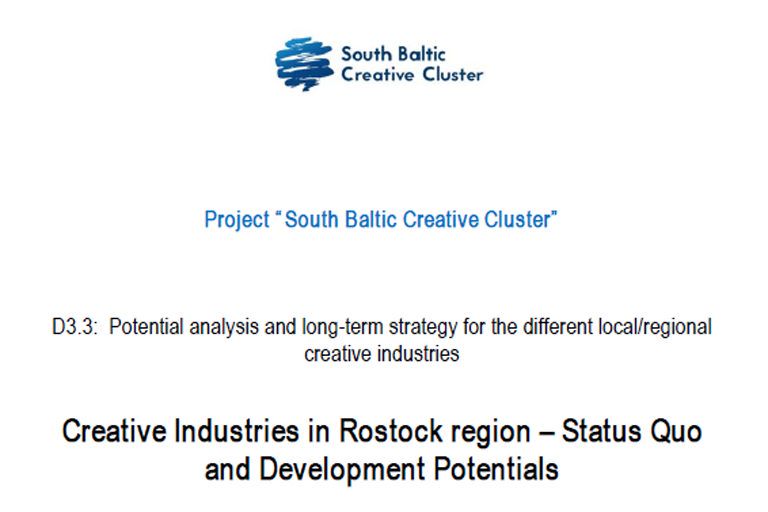 Regional analysis and strategy paper for Rostock region, was elaborated based on the consultations with several local and regional projects and players and including the recommendations from the cross-border consortium.

The political field of action „Cultural and Creative Industries” moved to Rostock’s urban society for a long time. The KREATOPIA conference is also undisputed at state level: the Chamber of Industry and Commerce and Ministry for Economic Affairs jointly invite creative industry representatives to come to Rostock. By the way: Both institutions are associated partners of the „creative clusters project”. The project South Baltic Creative Clusters aims at increasing the interlinked creative industry players to reach a critical mass which shall be achieved by international networking on the one hand and by supporting the institutionalisation and positioning in Rostock on the other hand.

As one of the first steps in the implementation of the Rostock Science Concept, an international consortium under the leadership of the Rostock city administration drew up an integrated strategy in 2016 in favour of new lifestyles and working styles – with corresponding urban milieus – in Rostock and Szczecin. This strategy, which was confirmed by the Lord Mayor of Rostock, was unfortunately granted only the unpopular second place in the EU Urban Innovative Actions (UIA) Programme: no money, but the moral encouragement to continue in the sense of a talent promotion programme and to orientate itself towards San Sebastian. Out of this impulse, this idea was incorporated into the State Digitisation Initiative, which resulted into the state’s start-up/spin-off digital innovation centres. Furthermore, the criticism incorporated into Rostock’s UIA funding application for the EU and national „smart city campaign ductus”, which had previously been too technically understood, arrived at the right addresses. The German „smart city”
programme values changed and were turned into an urban development programme. Rostock submitted such a good project application in 2020 that it was awarded flagship status. The city no longer argues about the conductivity of cables and hard disk sizes, but works on establishing a digital lifestyle, digitalised places, urban spaces. Or, to put it differently, addresses urban development, networking and the common good.

Rostock successfully applied for the Federal Garden Exhibition, which is much more than just a pretty flower show due to its numerous major urban projects – joint under the label and concept “Rostock Oval”. In view of these very advantageous conditions, it is now essential to nurture the delicate plant of the creative industries and give it room to grow.